The best way to learn and become more creative as a developer is to focus on a side project. A really good friend coming back from Japan came to me with an idea when I needed that side project. This is how we created Japan Direct, from the idea to the App Store in almost no time.

The idea was simple. Japan rail network is very well developed but hard for foreigners to find their way around. Some websites do exist, but as not as friendly as it should be. That is what we aimed for, an hassle free train timetable app, focused on the user experience.

The first challenge was the data. We had to quickly validate we could get access to those timetable. I think that where my friend shined. We studied at the university together and used to spend quick some time reverse engineered apps and websites, but he found in no time the best way to get those data without knowing their data model or API.

On my side, I spent couple hours mixing free resources and designs on Sketch to define the user journey. Once I had a good idea of how it would look like, the code took place in no time.

Japan Direct was really quick to prototype because I coded most of the elements in the past. What I mean is that I based the core of the app on a template I created to illustrate how to implement an MVVM architecture in Swift.

After about 6h or 7h spent on the project, I had a beta ready to test but because it was important to me to keep a continuous delivery environment, I put together a quick infrastructure with Bitrise coupled with Fabric to make it faster for us to generate updates.

My friend focused on the user journey within the app, we redefined what was the Minimum Viable Product of our project and cut couple features we had (like advance research, sorting result etc).

Our first version was almost ready to be shipped but not quite yet. Part of continuous delivery is having continuous feedback, I implemented an easy way to report bugs from users but also automatically notify me for any crashes. I can’t think an app without those

A week after we talked the first time about it and about 10h of work on it, we had our app waiting for review. 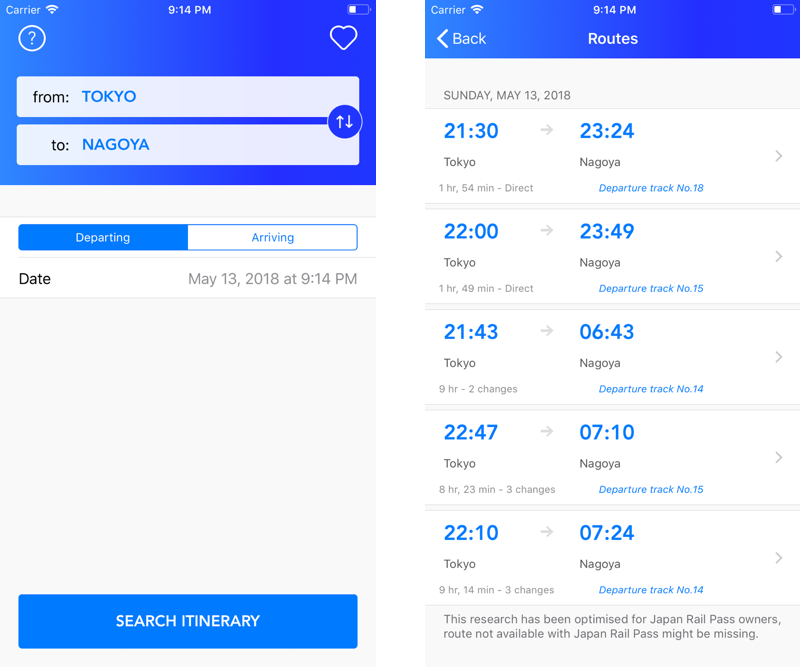 The goal for us was at different levels. One is to prove ourselves we can still be creative and enjoy small project. We also wanted to validate the idea without spending hundreds of hours on it. Finally, it’s a best way to reconnect and share something between friends! Thanks Flavien Recouvreur for that!

Now it’s time to see if we were right 🚅

A question? A feedback? Feel free to message me on Twitter.
TAGGED IN
Japan Direct iOS Continuous Delivery UX